Pinguecula: What Is It? Causes & Symptoms 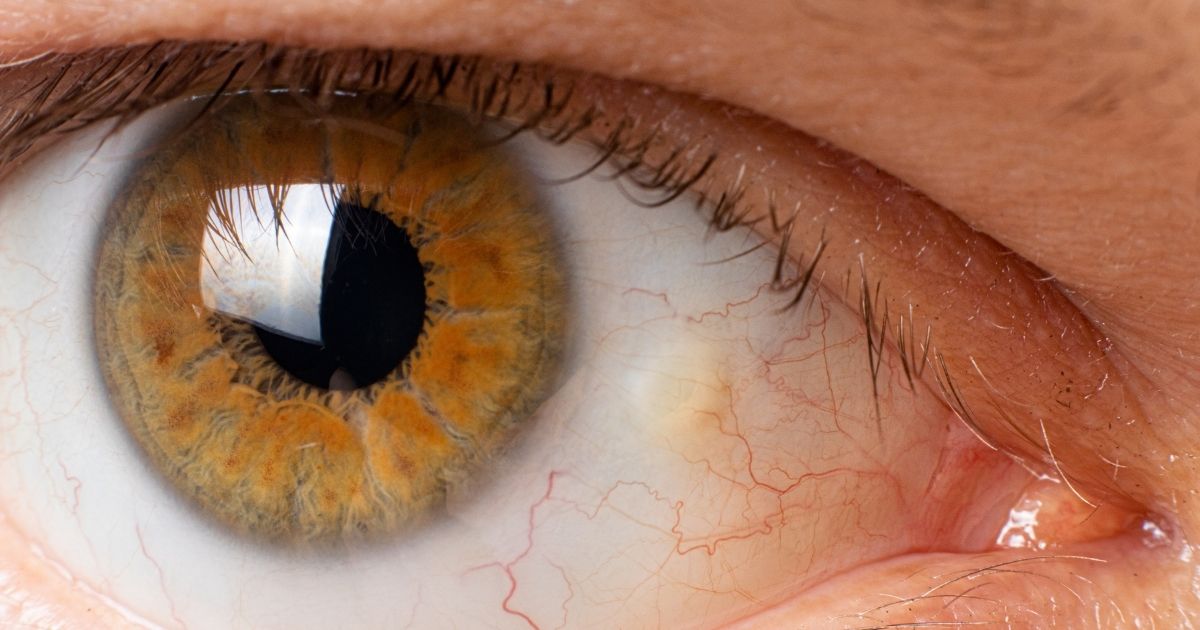 A pinguecula (pronounced pin-gwek-yoo-la) appears as a yellow lump on the white of the eye, usually growing on the side of the sclera near your nose. It's a common age-related condition with the growth being benign and usually nothing to be concerned over. The lumps can be made-up of fat, calcium, or both, and when there is more than one growing on the eye, the growths are then known as Pingueculae.

The reason why pinguecula develops isn't fully known, but studies suggest that frequent exposure to sunlight, dust, and wind can promote the development of this condition. This is why pinguecula can sometimes be known as "surfer's eye" as well. It is also believed that consistent use of wearing contact lenses may also be a contributing factor.

The chance of Pingueculae forming on the eye increases as we become older and the majority of people aged 70+ are likely to have one.

The most common symptom of a pinguecula is the spot on white of the eye that occurs, which can appear yellowish. Other symptoms may include:

The condition does not usually come with any discomfort, which is why treatment is unnecessary. However, it can be accompanied by other irritating symptoms such as dry eyes or the feeling of something in your eye, for which lubricating eye drops can help relieve symptoms.

In rare cases, surgical treatment may be required to remove the pinguecula if it becomes too uncomfortable or inflamed, but people usually want it removed for cosmetic purposes.

Does a pinguecula go away?

Once the pinguecula has formed on the eye, it will not go away by itself. It's also worth noting that it will not grow across your cornea, so there doesn't need to be any concern with the lump getting larger. The only way to remove the bump on the eyeball is by surgery.

Pinguecula is not considered to be a serious condition. There is usually no pain or discomfort in most cases, and people can live day-to-day life without any treatment needed.

Lubricating eye drops can help alleviate symptoms that accompany pingueculae, such as dry eyes or the feeling of something in your eye. You can purchase these eye drops from over the counter, or your optician can recommend a suitable remedy.

How common is pinguecula?

Pinguecula is a common condition that affects most of us as we reach our later years (around 70). A higher number of cases appear in those who live in tropical climates that have extensive exposure to sunlight.

Can computer screens cause pinguecula?

There is no evidence to suggest that staring at a computer screen for long periods will cause pingueculae to occur. It can, however, create a risk of digital eye strain developing, which will lead to similar uncomfortable symptoms such as:

Can pinguecula cause blindness?

There have been no cases of patients with pingueculae going blind. The lump usually develops on the side of the eye and doesn't typically grow to a large size that will block your vision.

What is the difference between pterygium and pinguecula?

Pinguecula and pterygium are conjunctival masses that may cause irritation to the eye. Pinguecula appears as a yellow lump on the white of the eye, usually growing on the side of the eye near your nose and is not considered a serious condition.

Pterygium is a fibrous growth on the eye's surface, growing over the conjunctiva and may invade the cornea, which can decrease your vision. For this reason, pterygium is considered to be a more serious condition than pinguecula.

How long does it take for pterygium to go away?

Pterygium will not disappear by itself. The growth can only be removed with surgical treatment. The procedure is minimally invasive and generally takes around 30 to 45 minutes to perform.